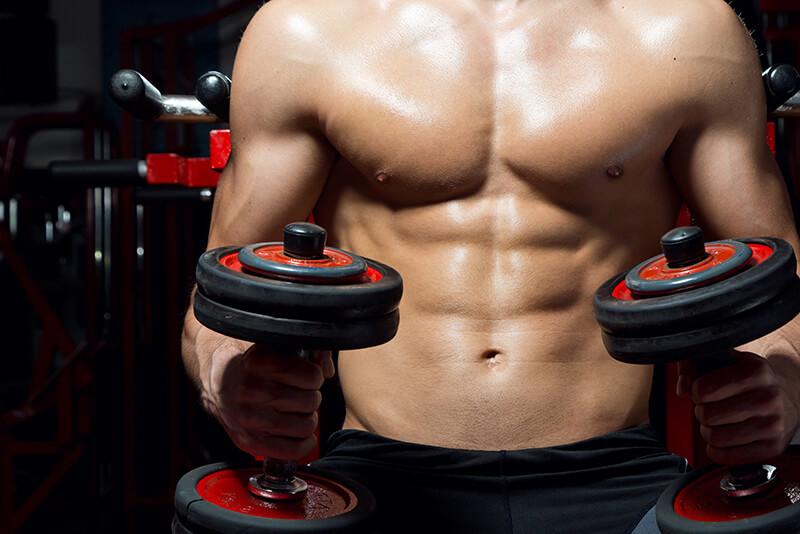 In 2015, researchers conducted a systematic review and meta-analysis of numerous randomized, placebo-controlled studies on red light therapy and muscle recovery and performance. Based on the study, the authors concluded that red light therapy "improves muscle performance and speeds recovery." [1]

Less pain and damage after intense workouts: In 2014, red light therapy was tested for muscle recovery in healthy young men after "damaging eccentric exercise". The light therapy group showed a significantly reduced loss of muscle strength, less muscle soreness, and less movement restrictions, and this was demonstrated up to 4 days after harmful exercise. [3]

Recovery from demanding workouts: Researchers in the 2014 study cited above found that light therapy reduces muscle soreness after strenuous exercise, and also that a single red light therapy treatment immediately after damaging exercise was effective in reducing muscle pain and loss of strength. [3]

Less delayed muscle soreness: Delayed muscle pain (DOMS) is pain and stiffness that you feel 24 to 72 hours after a workout or strenuous activity. A double-blind, randomized study assessed light therapy, exercise, and DOMS and concluded:

Less walking damage: In 2012, it was concluded that runners in the light therapy group experienced reduced “exercise-related oxidative stress and muscle damage”. Researchers stated that the modulation of the redox system (reduction of oxidative stress) by light therapy likely delayed and reduced skeletal muscle fatigue after running. [9]

Many studies have shown a sharp decrease in CK levels for light therapy groups versus placebo and control groups.

A recent 2018 systematic review and meta-analysis was conducted in the Clinical Journal of Sports Medicine to assess the muscle effects of light therapy, especially in terms of creatine kinase levels after exercise. After reviewing 14 studies, the authors concluded that light therapy has a positive effect on the control of creatine kinase activity. [12]

These positive results build on previous research. For example, a 1990 study assessed numerous soft tissue injuries and concluded that light therapy was an effective method of recovery, with significantly longer healing times. [14]

The results in the rugby field were consistent with the results in the laboratory: rugby players who received light therapy treatments saw a “significantly reduced percentage change in blood lactate levels (p ≤ 0,05) and experienced fatigue (p ≤ 0,05). " [15-16]

A double-blind, placebo-controlled trial tested pro-volleyball players and found this about the light therapy group:

Women feel less pain from exercise in the postmenopause:
Light therapy has been shown to be clinically effective in reducing muscle soreness in a wide range of populations, with especially encouraging results for postmenopausal women combining red light therapy with exercise.

Researchers found that "recovery time showed a significant decrease only in the LED group." They concluded that light therapy and exercise "can improve maximum performance and post-exercise recovery in postmenopausal women." [20]

Your strength increases with this therapy

Here are more reasons why so many professional strength trainers include red light therapy in their routines.

Researchers concluded, "The application of phototherapy provides improved strength gains when applied before exercise. The application may be of additional benefit in post-injury rehabilitation where strength improvements are needed." [21]

Stronger legs: That above increase amounted to a 55% increase in leg press tests, much higher than the non-therapy group. The men who received light therapy were "the only group to show an increase in muscle performance in the isokinetic dynamometry test compared to baseline." [22]

Stronger grip: A 2014 placebo-controlled study found that red light treatments reduced the maximum repetitions of hand and grasping exercises by 52%, as measured with an isokinetic dynamometer. [23] Numerous other studies have also shown significant increases in grip strength during exercise after light therapy treatments. [24]

Forgot your username? Forgot your password?
Save
Cookies user preferences
We use cookies to ensure you to get the best experience on our website. If you decline the use of cookies, this website may not function as expected.
accept all
Decline all
Read More
Marketing
Set of techniques which have for object the commercial strategy and in particular the market study.
Google
Accept
Decline
openx.net
Accept
Decline
Analytics
Tools used to analyze the data to measure the effectiveness of a website and to understand how it works.
Google Analytics
Accept
Decline